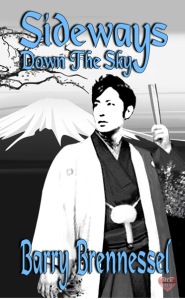 2015 Co-Book of the Year, On Top Down Under Book Reviews

In the land of snow monsters and steam baths, complex characters as diverse
as the Japanese terrain experience lust, loss, and love.

A young boy performs a daring rescue. A woman loses her old life to face an uncertain new one. A teenager suffers through a cataclysmic event. Unusual bonds form at the Tokyo Olympics. A rent boy’s hardened heart melts when he meets a sexy, buoyant stranger.

Much like the Japanese islands themselves, there is commonality to be found among myriad differences. The poet, the musician, the artist, the tortured mother, the bankrupt father, the protective brother—they all know that there’s a new day awaiting them after the moon slips sideways down the sky.

This is another wonderful book by Barry Brennessel; Paradise at Main & Elm was my Book of the Year in 2013. Sideways Down the Sky now joins it on my list of all-time favourites, and while Adrian and Ezra hold a special place in my heart, so do several of the characters in this book. I loved Akio and his enduring love for Genkei. I thought it was fitting he ran into Kazuki, their understanding of pain and the special relationship that was forged from that. Then there are Yuji and Toru, two rent boys who Aiko sees so much hope for, a project that gave him so much – an ‘ending and a beginning’. Sideways Down the Sky is well named and evocative; it resonated with me, and if you like Barry Brennessel or the sound of the book, I cannot recommend it highly enough. 5 Stars!

––Kazza for On Top Down Under Book Reviews 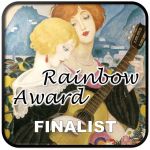 Revenge is a dish best served with a little bit of spice,
three dashes of magic, and a whole lot of flair.

Your eyes are squeezed tight. Your hand is over your racing heart. Your mouth is agape. And your tongue is planted firmly in your cheek. After you’ve read these six mystical, magical tales of torment and revenge, you’ll be looking over your shoulder, pausing at corners, and keeping that porch light burning bright all through the night. Oh, and you might chuckle once or twice, too. After all, what’s fright without a little delight? Hexes, curses, old family recipes, old family secrets, stolen cars and stolen lives. It’s all just another day in the lives (and deaths) of a special kind of folk.

“This is definitely for those who are open to LGBT writing but are not looking for what is these days termed MM or romance. It is sharp, it is offbeat and out there, and it makes the reader think…I most definitely recommend A Special Kind of Folk.”

—Kazza K. for On Top Down Under Book Reviews

These interconnected stories follow the adventures of Brian, Ondrej, Yuji, Jason, and others as they navigate the tumultuous path of life and love.

“Reunion is set in Tokyo and this is important in that we do not get many gay stories set in Asia and with Asian characters. But even more than that, the novel changes locales and we go to France, to London and to the Czech Republic and we get a series of interconnected stories that all follow the themes of life and love. Something else that is special here is that no one or two stories stand out. Each and every story is a wonderful read and not just the plots make them so good but the gorgeous prose and the way the writer uses emotions to draw us in.”

“Brennessel shows his mastery in crafting a surface story that is delightful on its own, yet also resonates with each of the other stories in the collection.

Each story is so intricately entwined with the others that it is difficult to point to any one as being a favorite, although the third story, ‘Nagasaki,’ came closest to earning that superlative[…] 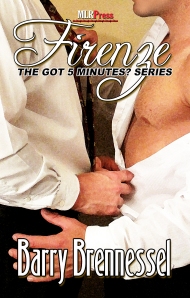 Brandon Meier’s academic year in Europe takes him far beyond
museums, castles, and classrooms. When he embarks on a month-long rail journey,
his sightseeing includes an edgy French boy, a Carravagio-esque Italian, a rich
Swiss lad, a Croatian heartbreaker, and an Indonesian beauty in Amsterdam, to
name but a few. These are lessons no textbook can ever teach.

It’s not long before Brandon realizes that the best
sightseeing is almost always off the beaten path. From sultry nights in saunas,
to midnight strolls in seemingly endless parks, chance encounters in sleepy
seaside towns and nights of wining, dining, BMW convertibles and penthouse
apartments, Brian’s year in Europe is anything but “by the textbook.”

“It’s a petit-four of a story: tasty, with layers, and a mere mouthful. And sometimes a mouthful is all you want.”

–Cryselle’s review of Firenze for Reviews by Jessewave

A compendium of varied tales with timeless themes.
Featuring: 1909, The Celestial, Wellspring, Running Up That Hill,
Reunion, Sideways Down the Sky, and Tinseltown.